I have been contemplating if I would share travel posts with you, guys. My original plan was to share only skin care and wellness tips to readers. However, I realized that keeping a healthy body also involves having a sound and happy mind, and what better way to keep one’s spirits up than to experience what life has to offer (aka travelling)! Also, the truth is, I miss the adventures now that I’ve been working as an intern in the hospital for five months now. In a way, sharing tips and photos from other places would be an escape for me. So now, I would like to share with you why Bataan (a province in Luzon, Philippines) should be marked on your maps.

I didn’t know what to expect of the beaches of Bataan. My high school friends (mostly, Giselle) did all the planning and I just trusted them to take me to a beautiful place. The beach in Bagac, Bataan, was unfortunately not that nice. The sand was black/gray, a bit coarse, and there was nothing special about it. HOWEVER, the place where we stayed at was the best!

You see, I am not a beach person (I’m not a bitch, either haha). It’s the cultural and historical appeal of Las Casas Filipinas de Acuzar that makes me want to go back.  This place is really magical! Let me show you some of the pictures I took. 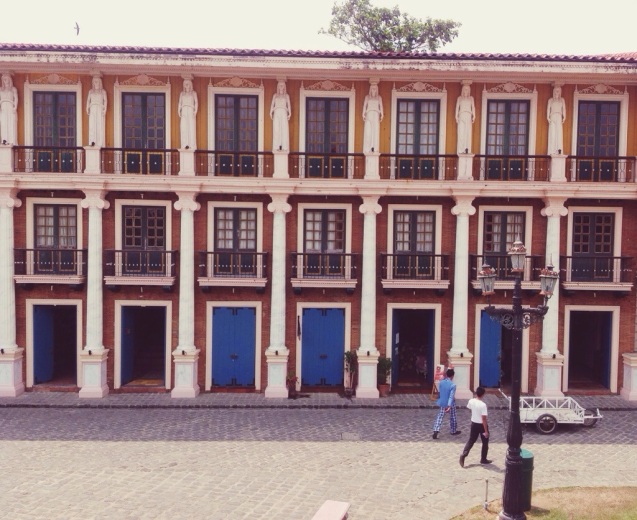 I love the doors.

According to the tour guide, the houses came from different towns in the country. “How did they do that?” I asked myself. I wasn’t paying much attention to the tour guide cause I was so busy staring at the houses. Later, I learned that the parts were transported piece by piece while some were just replica, but they really did a good job. I felt like I was transported a hundred years back while walking through the resort. I wanted to live there. 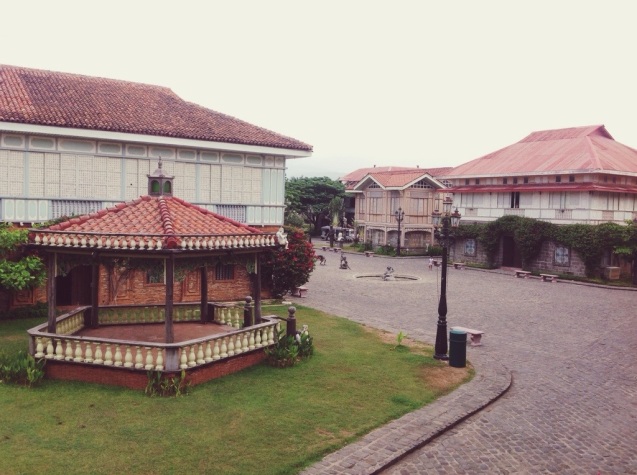 This was the view from our room. Lovely.

A huge painting in one of the houses

I love the symbolism of placing women’s statues as pillars of the house.

That smile is a fake. The bench was scorching hot!

I learned that the “Aliping Saguiguilid” were called that way because they were allowed to move and serve only from the sides of the house. Meaning, there was like this imaginary line which they cannot cross unless they should get or put something in the room.

Do you know that there are two other types of slaves? One is the “aliping namamahay” who is allowed to have his or her own house and family (not staying in) and the second – the “aliping binabahay” (the slave the boss marries)! Haha! 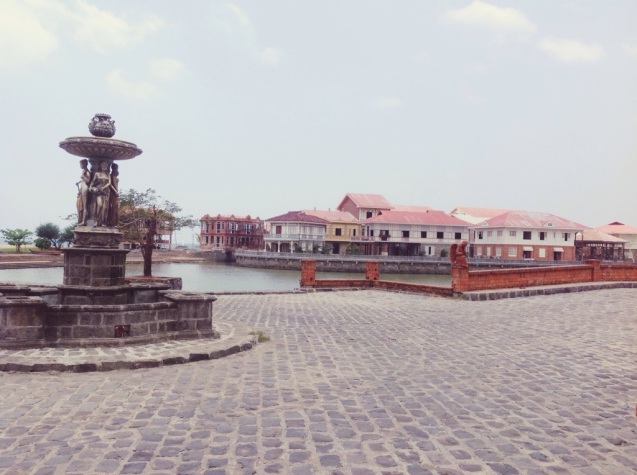 There are two restaurants in the complex — one serving Filipino food, and the other, Italian. You should order pork binagoongan in the Filipino restaurant. The coffee (powder) in the hotel room was so good. It was better than what they served for breakfast! I just had to share it, haha.

There’s a pool if you don’t like to stay at the beach. Also, there’s an area where you can play piko, table tennis, sungka and other traditional games for free. The souvenirs were really expensive (read: not worth it).

To sum up, I’m just so happy we went there! It was a great place for taking pictures since each corner is a potential backdrop. We actually saw a prenup shoot when we were there.

Note that I wrote this blog entry in the summer of 2014, just after the trip. The buildings under construction at the time may have been fully built by now.

Currently wishing to have weekends off regularly,